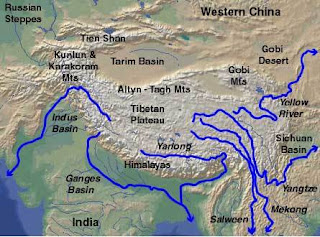 The Third Pole is a reference to the Tibetan Plateau. It is a lock box of snow and glacial ice that supplies fresh water to nearly a third of the world's people. With 37,000 glaciers on the Chinese side alone, the Tibetan Plateau is home to the great rivers of Asia - - the Yangtze, Yellow Mekong, and Ganges. Lonnie Thompson, a glaciologist at The Ohio State University refers to the Tibetan Plateau glacier system as "Asia's fresh water bank account."
But the bank account ledger is becoming unbalanced. The plateau as a whole is heating up twice as fast as the global average of 1.3 degrees F over the past century - - and in some places faster. This warming produces the worst of both worlds for the region - - too much water in some places and too little in other places.
This is happening in a densely populated and conflict prone part of the world - - at the convergence point of India, Pakistan, China, and Tibet. A mixture of cultures, religions, and politics in an area undergoing tremendous economic change. China is currently in the midst of a drought in the southwestern part of the country that has left 24 million people short of drinking water. Dwindling water supplies and drought comes just as China's wealth is increasing demand for more water. McKinsey & Co. estimates China's demand for water will be 25% higher that its supply by 2030.
Look for the water situation at The Third Pole to become more of a global issue - - two billion people are facing an era of diminishing ice and snow. This will have a profound impact on a very important region in a very important part of the planet.
Posted by Unknown at 8:17 PM