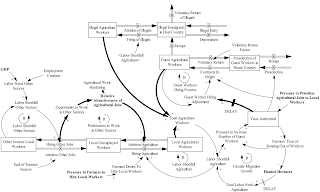 System dynamics modeling is an important technique for analyzing the temporaility of complex systems.  It is a method that engineers can apply to many situations that require complex temporality and causality analyses.

One of the best books on the business side of the system dynamics subject is Business Dynamics: Systems Thinking and Modeling for a Complex World (2000) by John D. Sterman.  Sterman explains that dynamic complexity arises because systems are: