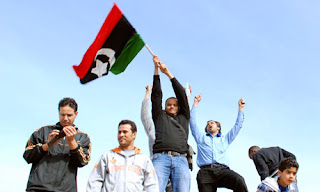 From the The Economist's Intelligent Life (January/February 2012) by Samantha Weinberg, What's the Greatest Invention of all Time - -

"The web has transformed at least a dozen fields: education, news, book publishing, music, finance, networking, dating, charity donations, shopping, language-learning, cartography, medicine, hypochondria and the way we talk to friends.  But above all it has framed the movement for democratic change in countries whose inhabitants used to be hobbled by the fear that they were alone.  The web enabled them to reach out, find support at home and abroad, and muster the courage to overthrow their tyrants.  It helped them bring in the promise, at least, of a brighter dawn.  Ask a young Egyptian, Tunisian or Libyan to name the greatest invention, and they might well choose the world wide web."
Posted by Unknown at 6:29 AM