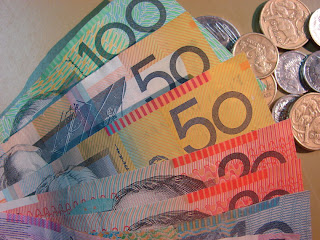 Good observation from Jim O'Neill (who I think is the Goldman Sachs economist who coined the term BRIC to describe the developing countries of Brazil, Russia, India, and China) in his The Growth Map: Economic Opportunity in the BRICs and Beyond - -

"I know some very smart people around the world who tell me that the best way to play the growth of China and India is to just trade the Australian dollar.  I'm not sure I agree, but if you look back you can see how dramatically Australia's trading relationships have changed.  Australia used to be regarded as a good lead indicator of the economic fate of the United States.  Not anymore.  Its largest export partners, in order of size, are now China, Japan, South Korea, India and then the United States.  These days, Australia is looking ever more to the rapid growth in Indonesia, which is just three hours away.

Australia will be in an incredible position for years to come, as it is rich in commodities and surrounded by fast-growing economies.  The top end of the Sydney property market is already dominated by Chinese money, and I anticipate that becoming more true."
Posted by Unknown at 8:00 PM