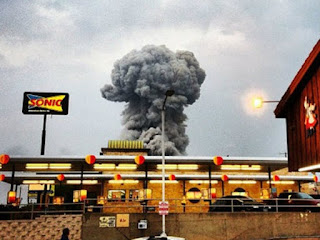 From the Engineering Ethics Blog - - The Disaster in West.  This is a great article and the blog covers an important topic (ethics) that gets overlooked (except once a year for one hour as part of P.E. CEU requirements).  Remember a key point in the Age of New Media Outlets - engineers have a great deal to say regarding disasters like West and Hurricane Sandy - we need to start taking the opportunity to add to the public debate.  We have a responsibility to write, speak, and inform the public on issues relating to the health, safety, and welfare of the public.  If we want a place at the table regarding important issues like public safety, climate change, and infrastructure investment, we had better get much better at the art of communication and public debate.

A back-of-the-envelope calculation of the power of the resulting blast can be done by beginning with an aerial view of the fertilizer plant before the explosion, which is still available on Google Maps. Comparison with views of the devastated explosion site indicate that the explosion was probably centered in a large, flat warehouse building that appeared to be one story high and measured about 60 feet by 110 feet. If we assume it was packed to a height of eight feet with ammonium nitrate (not an unreasonable assumption as distributors stock up for the summer growing season), the total mass of chemical in that building could have been as much as two thousand tons. Pure ammonium nitrate has about a fourth of the energy content per pound as TNT. Still, given these rough assumptions, if the whole mass went off at once, which it appears to have done, the force of the explosion could have been as great as a thousand tons of TNT, or one kiloton.


You may have run across the word “kiloton” in reference to nuclear explosions. While there were fortunately no nuclear weapons or radioactive materials involved in the West explosion, the nuclear weapon dropped on Hiroshima at the end of World War II had a yield of only about 16 kilotons of TNT. So what happened in West was one-sixteenth of a small nuclear bomb, in terms of destructive power. No wonder it showed up on seismographs as a magnitude-2 earthquake. 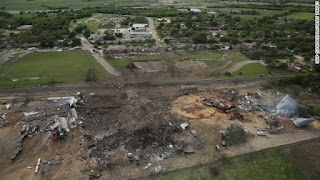