Moving Out of West Virginia? 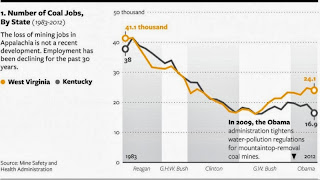 Interesting story on Wonkblog - Here’s why Central Appalachia’s coal industry is dying (Link).  From the post:

"While the coal industry directly employs just 21,000 workers in West Virginia, the industry itself added about $5.9 billion to state GDP in 2008 and generated $670 million in taxes — a whopping 15 percent of the state’s budget.

Those funds won’t vanish tomorrow, but they will slowly slip away. A 2010 report by the consulting firm Downstream Strategies noted that coal's decline would lead to sharp decreases in tax revenue for Kentucky and West Virginia. (By contrast, coal production in Northern Appalachia, including parts of Ohio and Pennsylvania, is expected hold steady for years.)

And there will likely be knock-on effects for years to come. As I reported here, many retired miners in Appalachia are getting hurt by the disruptions in the coal industry, as companies file for bankruptcy and try to shed pension and health obligations for retirees. Suzy Khimm's piece details the many ways in which Eastern Kentucky has been ravaged by coal's decline."
Posted by Unknown at 3:30 AM