The story below highlights the power of engineers - not just to be designers and builders - but to bring engineering problem solving skills to the classroom to address some of our more "wicked" social problems:

"So the school district shifted its focus for high school students.  Alongside the Elementary Initiative, the district began creating engineering classes within Western Hills High and other schools in partnership with local universities and the National Science Foundation.  The goal was a "multidisciplinary approach to education that encourages students to leverage the technology they use in their daily lives to solve real world problems," a summary of the program read.  Ninety percent of students at Western Hills lived below the poverty line.  Their classrooms had peeling linoleum floors and cracked chalkboards.  "Leveraging technology" was not what most students worried about.  Delia [Delia Morris, a high school sophomore at Western Hills High in 2009] signed up for an engineering course taught by Deon Edwards, whose introductory remarks reflected the reality that surrounded all of them.

"We're going to learn how to think like scientists," he hold his class.  "We're going to leave your parents and friends behind and learn to make choices with clear eyes, without the baggage everyone wants to put on you.  And if any of you didn't have anything to eat this morning, I keep energy bars in my desk and you should help yourself.  There's nothing wrong with saying you're hungry."

The real focus of Mr. Edwards class was a system for decision making known as "the engineering design process," which forced students to define their dilemmas, collect data, brainstorm solutions, debate alternative approaches, and conduct iterative experiments.  "The engineering design process is a series of steps that engineers follow when they are trying to solve a problem and design a solution for something; it is a methodical approach to problem solving," one teacher's manual explained.  The engineering design process was built around the idea that many problems that seem overwhelming at first can be broken into smaller pieces, and then solutions tested, again and again, until an insight emerges.  The process asked students to define precisely the dilemma they wanted to solve, then to conduct research and come up with multiple solutions, and then conduct tests, measure results, and repeat the procedure until an answer is found.  It told them to make problems more manageable until they file into scaffolds and mental folders that were easier to carry around.

The class's first big assignment was to design an electric car.  For weeks, students in Mr. Edward's class arranged themselves into teams and followed flowcharts detailing each engineering design process step.  The classroom had few materials to work with.  But that was okay, because the real point of the exercise was to learn how to squeeze information from your environment, no matter where it comes from.  Soon students were visiting car dealerships, going to mechanics' shops, and raiding aluminum cans from recycling bins to make battery-testing kits from instructions they had found online.  "My first job it to teach them to slow down a little bit," Deon Edwards told me.  "These are kids who solve problems all day long.  They deal with missing parents and violent problems all day long.  They deal with missing parents and violent boyfriends and classmates on drugs.  Everything they experience says they have to choose quickly.  I just want to show them that if you have a system for making choices, you can afford to slow down and think.

Midway through the semester, after the class had completed their car designs and moved on to building marble sorters.  Delia's twenty-one-year-old sister had a baby.  The child's father was out of the picture and Delia's sister, exhausted, begged her to babysit in the afternoons.  If felt like a request that was impossible for Delia to refuse.  The right decision, Delia's dad told her, was obvious.  This was family.

So one day in Mr. Edward's class, Delia pulled the engineering flowchart from her binder and, with her group, put her dilemma through the design process's steps.  If she babysat, what would happen? One of the first tasks in the engineering design is finding data, so Delia began making a list of experiences than seemed germane.  Another sister, Delia told the group, had taken an after-school job a few years earlier and the family had quickly come to rely on that paycheck, making it impossible for her to quit and putting her hopes of community college on hold.  If Delia started babysitting, something similar would happen, she suspected.  That was data point one.

Then Delia began writing out what her schedule might look like if she was responsible fro an infant every afternoon.  School from 8:30 to 3:30.  Babysitting from 3:30 to 7:30.  Homework form 7:30 to 10:00.  She would be tired after watching her nephew and would probably end up watching television instead of doing her math or studying for a test.  She would become resentful and make bad choices on the weekends.  Data point two.

As her group walked through the flowchart, they broke her dilemma into smaller pieces and brainstormed solutions and role-played conversations while the rest of the class discussed how to separate colored marbles from clear ones.  Eventually, an answer emerged: Babysitting seemed like a minor sacrifice, but the evidence suggested it wasn't minor at all.  Delia prepared a memo for her father listing the steps she had gone through.  She wouldn't be able to do it, she told her dad.

Psychologists say learning how to make decisions this way is important, particularly for young people, because it makes it easier for them to learn from their experiences and to see choices from different perspectives.  This is a form of disfluency that allows us to evaluate our own lives more objectively, to offset the emotions and biases that might otherwise blind us to the lessons embedded in our pasts.  When the animators behind Frozen were trying to figure our their film, the Disney system pushed them to look to their own lives as creative fodder.  But it's not just creative material we can mine from our experiences - we can find data in our pasts, as well.  We all have a natural tendency to ignore the information contained in our previous decisions, to forget that we've already conducted thousands of experiments each time we made a choice.  We're often too close to our own experiences to see how to break that data into smaller bits.

But systems such as the engineering design process - which forces us to search for information and brainstorm potential solutions, to look for different kinds of insights and test various ideas - help us achieve disfluency by putting the past in a new frame of reference.  If subverts our brain's craving for binary choices - Should I help my sister or let my family down? - by learning to reframe decisions in new ways." 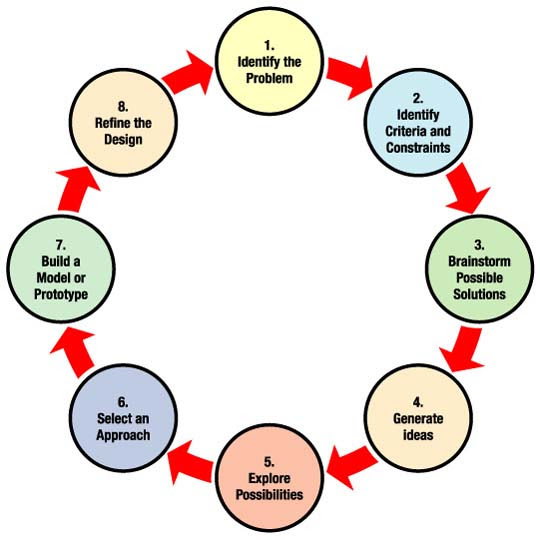