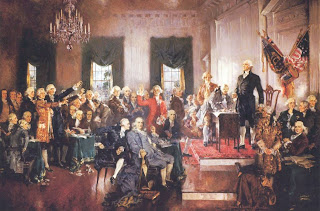 We have taken what "The Greatest Generation” build and gave us and we have become the “Grasshopper Generation.” Consumers of almost everything in our path – consumers of our economic future, consumers of our international goodwill, consumers of our energy resources, consumers of our educational heritage, consumers of the environment, consumers of our national infrastructure – consuming today without any regard for the future.
We also consume the public space where many solutions to our problems rest – from health care reform to improvements in the education system to climate change. We blame others – leaders, institutions, political parties – the current paralysis is never the fault of the “Grasshopper Generation.” But think about it – the “Grasshopper Generation” has allowed money in politics to become so pervasive that lawmakers spend most of their time raising it and selling their souls. We allowed the gerrymandering of political districts. We consume the cable TV culture of shouting and segregation. We consume campaigns versus governing. We allowed a globalized business structure and culture to have no apparent home or local interests – which rarely speak out on health care reform, education problems or our financial health and future.
As Tom Friedman pointed out in The New York Times – the “Grasshopper Generation” comes up with the same answers – we need better leaders. But what is often painfully missed is that the first step in developing and finding better leaders is for the “Grasshopper Generation” to become better citizens. We have numerous problems and issues that will require thoughtful national debate and discussions – this collective conversation is the very heart of good citizenship. Health care reform is but one example – where 80% of our cost problems are probably in 20% of our population. Should we discuss the 85-year old grandmother with liver cancer who is in ICU at $10,000 per day - that we can keep alive three additional months for another $2,000,000? Is it a hard, painful, and emotional process and discussion? Is it the toxic blend and mixture of politics, medicine, religion, and economics? Yes - - but absolutely necessary – with the firm understanding that the first steps in this discussion starts as civil conversation among concerned and informed citizens.
The solutions to our problems will be painful and will require real sacrifice from all our citizenry. It will require the “Grasshopper Generation” to become better citizens – better educated, informed, willing to sacrifice, and thoughtful – with an orientation toward pragmatic and long term ideas and solutions. It may take 10 million people marching in Washington DC on a cold Saturday in March. Not as an angry mob in search of people and places to fix blame on, but as silent and concerned citizens who understand that this is our fault and our future. That all the solutions have the same path – taking more responsibility and becoming better citizens.
Posted by Unknown at 6:41 AM