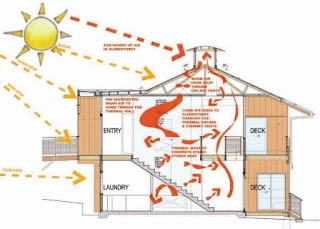 The National Renewable Energy Laboratory (NREL) - http://www.nrel.gov/, a unit of the U.S. Department of Energy, is designing a 219,000 square foot “net zero” facility in the Rocky Mountain region. The term “net zero” means that it will consume so little energy that it won’t need to draw any electricity from the grid. The building is being planned and designed to utilize 25,000 BTUs per square foot a year compared to a more typical 65,000 BTUs per square foot a year. The NREL requirement is 50% more energy efficient than the new commercial energy code issues by the American Society of Heating, Refrigerating and Air-Conditioning Engineers (ASHRAE).

To meet the goal, both technology improvements and cultural change must be considered. For example, putting up walls and ceilings to create individual work spaces impedes the flow of daylight and ventilation. So architects banned the traditional office. They did include a few semi-private rooms with walls that reach about halfway toward the exposed struts and girders that pass for a ceiling. Most employees, however, will work in cubicles with low dividing walls. Many aspects of energy efficient have their roots in organizational and cultural change. The NREL building is reducing kitchenettes from one for every 15 employees to every 20 employees. Using Internet-tied telephones rather than standard models while favoring laptop computers over PC workstations reduces energy consumption. Other small changes, like highly reflective interior pant and workstations in neutral hues to enhance daylighting and shutting off lights at night, will also have an impact.

The lack of privacy – not to mention the shortage of storage space, since cubicle walls are too low to hold shelves – has been a bit of a culture shock for NREL employees. The organizational culture is typically one of office, walls, and privacy. Another culture shock is no fixed thermostat – the facility will have no central air or heat and the temperature will fluctuate during the day, though it shouldn't’t go below 68 degrees or above 80.

Temperature is regulated through an age-old concept known as “thermal mass,” which involves sheathing the building in concrete panels nearly a foot thick. In summer, the panels will absorb the sun’s heat, keeping the interior of the building comfortable, much the way an old stone cathedral remains cool inside even on the warmest days. In winter, the building relies on thin sheets of perforated metal that hang down south-facing walls. The metal is painted black, so it heats up quickly in the intense Denver sunshine. Air flowing through holes in the hot sheet metal is also warmed. A fan then sucks the warm air into an underground labyrinth – a crawl space crowded with a maze of concrete blocks. The labyrinth stores the warm air until it is needed elsewhere in the building.
Posted by Unknown at 2:38 PM