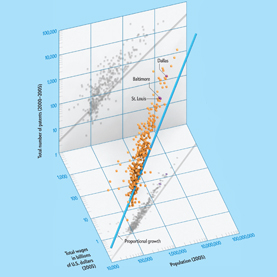 The current issue of Scientific American covers the new science of why cities become more productive and efficient as they grow (Bigger Cities Do More with Less by Luis Bettencourt and Geoffrey West).  The new science is multidisciplinary and is beginning to reveal key answers to urban growth - - cities concentrate, accelerate, and diversify social and economic activity.

Key points in the article include: