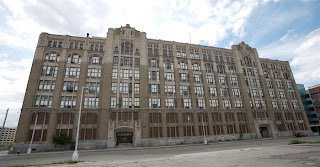 The Detroit school district announced this week that it would close 44 schools. The Kansas City school district announced a similar plan last week. Both districts are roughly cutting half of their existing schools. The stated reasons in both cases are financial problems of the districts, poor student performance, and declining populations in their urban centers. Empty buildings in empty cities in communities with empty dreams. What if these empty buildings become the cornerstone for a transition from familiar and broken institutions to new, strange, and flourishing ones?
Imagine the old and abandoned school as the linchpin for a new and different way to think about living in urban settings modeled and organized after an Israeli kibbutz (meaning gathering or clustering). Families and individuals utilizing the abandoned school facilities to live a communal life. The urban equivalent of an Israeli rural kibbutz -- co-housing communities in which singles and nuclear families build makeshift kinship networks in shared kitchens and common areas and on neighborhood-watch duty. Part Marx, part Buffet, part social, part economic, part Mad Max, part Exodus -- resilient communities which aspire to self-sufficiency and independence.
We have over 1,000,000 NGOs in the United States. Many are focused “up and out” -- doing wonderful work in developing countries all over Africa and Asia. What if we could establish and organize a group of NGOs were the focus is more “down and in” -- individuals and groups interested in helping organize, setup, support, and manage the formation of kibbutzim in selected urban settings. Groups and individuals in which the focus is on urban centers in places like Detroit, Kansas City, and Cleveland.
An abandoned urban school that educated 800 students - - think about the resources and opportunities the actual building represents. Land available for urban farming and farmers’ markets, classrooms tailored to different leaning styles, the art room as art studio and show room for budding communal artists, the auto shop space as community repair center, the old school theater as the venue for weekly community entertainment - - space for a community of ideas and shared goals. The old nurse’s office is transformed to address a growing social problem that larger parts of our society seem unwilling to fully address - - it becomes a free clinic staffed once a week by medical students, serving the needs of both commune and community. People and communities figuring out and experimenting with new ways to live off the grid -- powering their own facilities and developing encrypted digital currencies and barter schemes.
A Detroit Kibbutz - - a remix of work and life in an age of high unemployment, declining social safety nets, unavailable and unaffordable medical care, and increasing energy costs. The kibbutz offers a spark to maybe an era of increasing experimentation in new ways to learn and new ways to live. Some 23-year old unemployed college graduate -- who is tired of cynicism and distrust -- is thinking about this. The one plotting the revolution that will evolve into a new confidence that citizens working in common in a kibbutz like environment can change their lives and in doing so can change the world around them. Somewhere this 23-year old is parked in front of a vacant school -- others see only nightmares, but he or she sees a dream come true.
Posted by Unknown at 5:41 PM