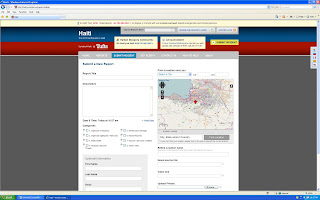 Ushahidi means testimony in Swahili. The company by the same name based in Kenya has developed an interesting application of “crowdsourcing” to aid in crisis-mapping. The technology has been utilized in disputed elections in Kenya, pinpointing locations of earthquake victims in Haiti, and even to warn of snow-covered roads in Washington, D. C.
Crowdsourcing is basically outsourcing of particular tasks to the general public (either groups or the community at large), through an open call to a large group of people (i.e., the crowd) and asking for contributions. The term was first used by Jeff Howe in a June 2006 issue of Wired magazine. Typically crowdsourcing has been viewed as a form of distributed problem-solving and production model. Problems are broadcast to an unknown group of solvers in the form of an open call for solutions.
Crowdsourcing in the context of Haiti involved Ushahidi advertising an emergency texting number via radio. Working off a paradigm of “many-to-many-to-many” - - the site collected user-generated cellphone reports of riots, stranded refugees, rapes, and deaths and plotted them on a map, using the locations given by informants. You end up with a system where victims supply on-the-ground data - - a self-organizing group of volunteers from around the globe translates text messages and helps to organize and direct relief efforts - - journalists and aid workers use the data to target the response. In an age of expanding global cellphone usage - - instantaneous information combined with “good-enough truths” may represent the future of managing relief efforts.
Ushahidi also symbolizes the power of global innovation - - from the backwaters of Kenya - - innovation from another and unexpected world. Open-sourced without patents, monopolies, and price - - made to work off the common denominator of the developing world - - the cellphone. Free to others with the power to remix for new projects and applications - - the right mix of technology, humanism, and “good enough” - - the correct tool for the spread and maintenance of global liberal democratic ambitions. The site is located at http://www.haiti.ushahidi.com/.
Posted by Unknown at 6:01 PM