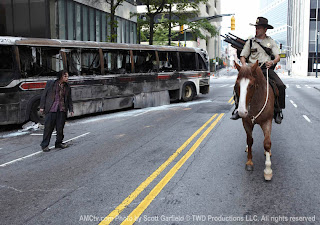 AMC has a new show that I would recommend. "The Walking Dead" is part maybe Lost with a little Lord of the Flies, but with zombies (You can probably come up with a multitude of movie combinations, as long as you end with "but with zombies"). The first episode aired on Halloween. It instantly ranked as the most watched scripted series in the history of cable television among 18 to 49 year-olds, a demographic courted by advertisers and by AMC.
The show takes place in and around Atlanta. The episodes were filmed almost entirely on location in Atlanta, where a roughly 30 percent tax credit cut down costs (see previous blog regarding tax tips from Keith Richards - - Gimme Shelter Indeed). Provided below is my rating of the show: