"Get The Frack Out" 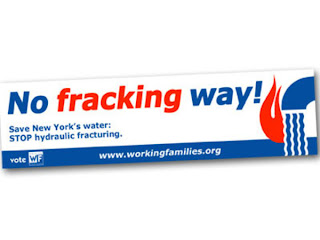 I live in Southlake, Texas - - the heart of drilling and new wealth associated with natural gas exploration.  Our city council is debating the approval of natural gas drilling within the city limits.  Even at the local level - - nothing is easy regarding energy development and production.  Many of my neighbor are sporting "Get The Frack Out" signs  in their front yards - - highlighting the concerns over the drilling technique of hydrofracking.

From Japan to the Gulf of Mexico to Southlake - - we are witnessing the end of easy energy, especially the end of easy oil.  The world won't run short of petroleum in the next few decades, but there's a limited supply of easy-to reach oil.  Between now and 2030, production from such "conventional" sources will barely rise - - from 79 million to 83 million barrels per day.

During the same period, demand for liquid fuels is expected to rise from 86 million to 106 million barrels per day.  While more than half of that extra demand will be met by other sources, such as biofuels and fuels derived from coal and natural gas (and Southlake may or not be a future source), the petroleum industry will have to make up the rest from harder-to-exact oil supplies.

To get at this oil, companies will drill in deep water to tap reserves below the ocean floor.  By 2030, the production of oil from waters deeper than 600 meters will increase from five million to 10 million barrels per day.  This year's disaster in the Gulf of Mexico - - where BP was drilling at a depth of 1,500 meters - - highlights the risks involved.

As oil gets harder to find, prices may rise, which will make riskier exploration more worthwhile.  This "higher price - - greater willingness to take risks" is an example of one such potential feedback loop.  The other potential loop was pointed out by Tom Friedman in his New York Times column today:

Bill Gates has also discussed the end of easy energy and oil - - "It is disappointing that some people have painted this problem as easy to solve.  It's not easy."
Posted by Unknown at 9:58 AM