Word of the Week - - Megadisaster 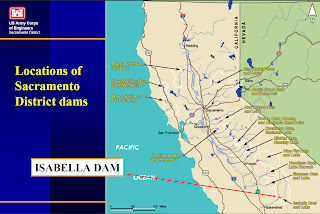 Megadisasters can overcome society's best efforts to protect against them.  The fact is, nature often gets the last word.  Japan and the rest of the planet saw this clearly demonstrated over the weekend.

The Pacific Northwest is at considerable risk of a strong earthquake from the Cascadia Fault, which lies off the coast under the seabed.  And while the coastal zone of the Northwest does not have as much residential and business development as the that slammed by the Japanese tsunami - - the earthquake risks farther inland along the Pacific Northwest could well end up sustaining severe damage.

Consider the interface between dams and earthquakes on the west coast of the U.S.  For example, the Lake Isabelle Dam is made up of two earthen dams that straddle the Kern River Valley about 40 miles upstream from Bakersfield, California.  The dams have serious problems including an inadequate spillway and a lack of protection from earthquakes along the Kern Canyon fault, but repairs could cost $500 million or more.  A catastrophic dam failure could submerge the town of Lake Isabella (population 4,400) and send billions of gallons of water flowing into Bakersfield (population 340,000).

Lake Isabella Dam is just one example - - of the nations 85,000 dams, more than 4,400 are considered susceptible to failure.  The cost to fix both public and private dams is over $70 billion.  Given our severe fiscal constraints, the likelihood of our being able to mobilize the resources to either significantly improve the dams and to improve disaster readiness is limited.  But as we all clearly saw the past weekend, there are few issues as important.  Even preventable disasters, however, get short shrift because of our aversion to long-terms planning and commitment.

What we have recently seen in Japan needs to be our wake-up call - - nature does not care about long-term debt and deficits.  CNN has done a great job of demonstrating to the world that geology is inevitable - - at some level, the problem for engineers and policy makers is how to translate geologic inevitability into the timescale of human decision-making.  The earthquake by itself is not what poses a hazard.  It is the buildings, bridges, natural-gas lines, water systems, health-care systems, and broad socioeconomic interdependency making up modern urban living that present the potential for our word of the week - - megadisaster.
Posted by Unknown at 7:48 PM