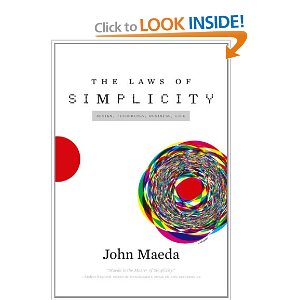 I am currently reading Walter Isaacson's Steve Jobs (2011).  Jobs interest in Eastern spirituality, especially Hinduism and Zen Buddhism, provides for an interesting view of his design philosophy.  Simplicity was and is a cornerstone of Job's (and thus Apple's) idea of the human and machine interface.  Look at the iPod - - a game-changer across numerous industries, it was so easy to operate it didn't need an operator's manual.  How many watches can make that claim?

A good companion book to Isaacson's is The Laws of Simplicity (2006) by John Maeda.  Consider his ten laws of simplicity: