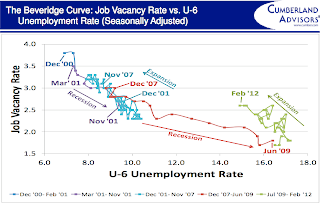 Named after an influential British economist of the 1930s and 40s.  The graph compares unemployment and vacancies.  As the economy contracts, joblessness rises and vacancies shrink.  During the recovery, the process reverses.  In the current upturn, the curve isn't retracing its steps.  Unemployment is falling more slowly than you'd expect, given the rise in vacancies.
Posted by Unknown at 8:30 PM