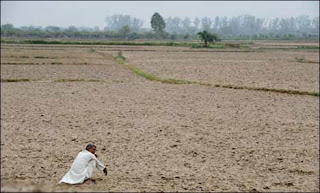 This year's meager monsoon is reducing water levels in some of India's reservoirs, putting added stress on a system that relies on hydroelectric for one fifth of its power (coal is #1 at 56.7%).  Last week's blackouts in India point out the constraints and complexities of the combination of low water supplies and high demand for electricity adding stress to a system that already has proved to have very little resilience.

The August 3, 2012 issue of the Wall Street Journal made the following points in the article, In India, Weak Monsoon Adds to Power Crisis:

"Either way, analysts say the effect of insufficient monsoon rains is likely to mean that wide-spread outages - though not necessarily on such a scale - become more frequent in coming weeks and months, especially in bread-basket states.

More than halfway through the season, the monsoons are 19% below the long-term average.  In the worst-affected states in northern India, which are heavily agricultural, farmers are relying more than usual on electric pumps to draw groundwater."

Energy needs water and water needs energy.  Engineers will increasingly be tasked to evaluate our water and energy systems as one single system.  This will be critical with climate change and extreme weather.  To fully understand one, you need a complete understanding of both.
Posted by Unknown at 12:35 PM