Thomas Ricks The Generals: American Military Command from World War II to Today has gotten mixed reviews, but I found the book insightful with broad applications to management studies and engineering.  For example, many engineers are cast in the role of trusted adviser to public officials and leaders.  From energy policy to figuring out the impacts of climate change on key parts of our infrastructure, engineers will increasingly be asked to offer professional judgement on complex issues.

As Ricks and others have pointed out, General George Marshall during World War II was the model of  professional adviser.  The Marshall - Roosevelt relationship was never close, but always professional.  Difficult times and difficult issues requires a higher level of frankness - - the public and professional obligations of engineers requires frankness.

"Marshall's attitude toward his dealings with Roosevelt provided a model of civil-military discourse.  It was, most of all, frank - at least on Marshall's side.  Yet it was not close.  As chief of staff, Marshall would insist on remaining socially and emotionally distant from the president, seeing it as necessary to maintaining a professional relationship.  Nowadays, most senior officers would leap at the chance to spend time with the commander in chief during his more relaxed moments.  For example, before the Iraq war, Gen. Tommy R. Franks, then chief of the U.S. Central Command, overseeing the Middle East, visited President George W. Bush at the latter's ranch in Crawford, Texas, as Marine Gen. Peter Pace would do later as chairman of the Joint Chiefs of Staff.  Marshall was wary of such intimacies.  "I found informal conversation with the president would get you into trouble," he later explained.  "He would talk over something informally at the dinner table and you had trouble disagreeing without creating an embarrassment.  So I never went."  He refused even to laugh at the president's jokes.  The first time he ever visited Roosevelt's home at Hyde Park, New York, was the president's funeral.  But he and the president were perhaps the best wartime civil-military team the nation has ever had." 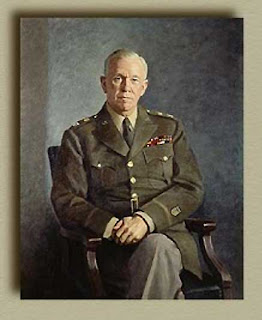