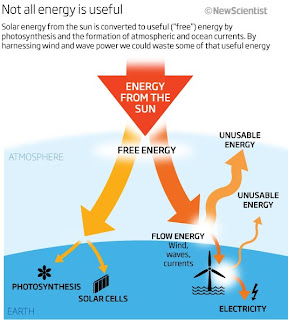 Axel Kleidon of the Max Plank Institute for Biogeochemistry in Jena, Germany is working on a new theory of the thermodynamics of the Earth system.  The model looks at a fundamental question - - Can you deplete "green" energy sources?  Kleidon is concerned that efforts to satisfy a large proportion of our energy needs from the wind and waves will sap a significant proportion of the usable energy from the sun.

Here is how Kleidon views the issue of "free" energy.  Humans currently use energy at the rate of 47 terawatts or trillions of watts.  This comes from burning fossil fuels and harvesting farmed plants.  This corresponds to roughly 5 to 10% of the free energy generated by the global system.  So far, so good.

Of the 47 terawatts - - 17 comes from burning fossil fuels.  So to replace this, we would need to build enough sustainable energy installations to generate at least 17 terawatts.  We would need to built wind farms totaling more than 17 - - because no technology is perfectly efficient.  But by setting up enormous wind farms, we convert part of the sun's useful energy into unusable heat.  You end up sucking energy out of our global circulation system.  The winds will not die - - but count on changes in precipitation and turbulence.

Keep an eye on this - - solar energy from the sun is converted to useful ("free") energy by photosynthesis and the formation of atmospheric and ocean currents.  By harnessing wind and wave power we could waste some of the useful energy.

As Kleidon has stated - - "We have a hard time convincing engineers working on wind power that the ultimate limitation isn't how efficient  an engine or wind farm is, but how much useful energy nature can generate."

Additional information is available in the April 2-8, 2011 issue of the New Scientist - - "The fantasy of renewable energy" by Mark Buchanan
Posted by Unknown at 5:59 PM

Email ThisBlogThis!Share to TwitterShare to FacebookShare to Pinterest
Labels: Sustainability